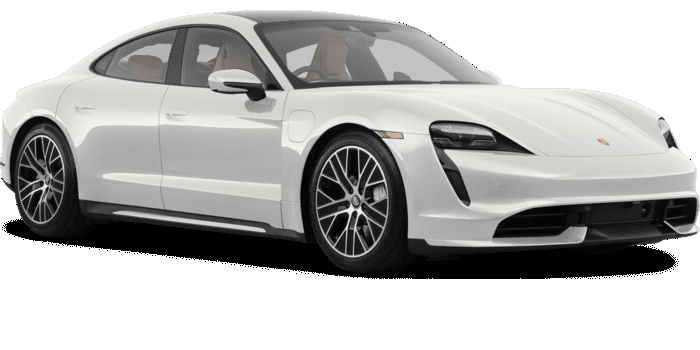 Meticulously perfected with innovative technologies developed on the racetrack and on the roadways, Porsche sets its vision towards the future with the Taycan — a striking exhibition of an all-electric sports sedan.

Making history as the first purely electric sports car for the Porsche brand, the Taycan boasts a total system voltage of 800V, a combined maximum system output of 750 horsepower, and blistering acceleration.

Motorsports-inspired aerodynamics help the Taycan cut through the air and deliver sublime handling through the corners.

A cleverly-positioned under body battery gives the Taycan an optimal center of gravity. Inside the cabin, drivers will have access to a fully digital curved display adapted to suit the interior design.

Advanced connectivity features help you monitor efficiency, charge, and performance with a quick glance at one of up to three different display screens.

What the Critics Say
“With a striking appearance as well as a highly customizable and high-tech interior, Porsche’s electrified four-door lives up to its premium pricing. The Taycan also does a remarkable job of reminding its pilot that they’re driving a Porsche thanks to its lively steering, stoic composure, and refined ride. Stomping the accelerator is like firing a missile, except it can be done repeatedly.”

“When the road turns into track, however, the Taycan turns into a Porsche. At our test facility for this story the Taycan proved itself 100 percent worthy of the crest on its hood.”

The operating system has been improved, and Android Auto™ joins Apple CarPlay® as standard equipment, as well as enhanced voice commands.

Optional remote parking via your smartphone is also new for 2022 . Your Porsche can park itself in tight spaces, with no-one behind the wheel. Also, tweaks to the thermal management and charging systems allow for more efficient recharging.

The big visual change for the 2022 Posche Taycan is the addition of the Paint to Sample (PTS) program. That allows you to further personalize your new Porsche by choosing a custom color you create. Or a classic Porsche color from the 1980s or 1990s.